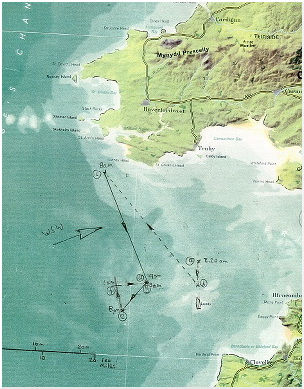 On Tuesday 12th February 1889, The South Australian sailed from Cardiff in fine weather bound for Rosario on the River Parana in Argentina loaded with railway lines and fish plates. As she tried to clear the Bristol Channel she ran into a WSW gale with high seas and shortly after 11pm on 13th she sustained damage forward. Conditions did not improve and at 1am on 14th Captain Arthurs decided to run before the wind to Penarth Roads. The pumps were tried and the vessel found not to be making any water. However a rumbling noise was heard below and the second mate and a seaman were sent to investigate. In the between deck they found that the cargo at the after end was secure but, sparks were to be seen about the main hatch and there were noises which they thought were the rails striking against each other. The captain then ordered the seaman and the carpenter to go into the between deck forward. There they found the cargo moving in a body as the ship rolled. Some stanchions had broken and the wooden shores that held the rails against the deck above had fallen. The carpenter clambered over the cargo as far as the main hatch, where the cargo was all adrift and, he said, flying about. He could hear water rushing, and though he could not see it, thought that the cargo port on the starboard side had been knocked out. The second mate then looked into the fore hold, where in the light of a candle he thought he could see 7 to 8 feet of water.

The second mate then went on deck, where he told the crew to cut away the boats as the ship was sinking. He reported to the captain on the poop, who brought the ship to the wind on the starboard tack so as to bring the loading-port above water. Looking over the side he and the mate saw that the loading-port was indeed pushed out by six inches. The captain tried to place a bed blanket over the gap but failed. He then gave orders for the port lifeboat to be launched but the crew were already doing this. They then got into it, called to the master to jump or he would be left behind, and he leapt for his life. Whilst fending off all the oars but one were broken, as the ship was plunging and rolling heavily in a cross sea. When the painter was cut, the boat drifted astern where two men were seen on the poop. The boat was close to the vessel and William Heddles, who had been at the wheel, jumped and was picked up, but James Timbrell the Jamaican cook, would not even though he was told to use one of the lifebuoys. He was heard shouting as the boat slipped further behind the ship. After a while all that could be seen of the South Australian were her top-gallant and royal yards silhouetted against the sky and she was undoubtedly sinking.

The survivors in the lifeboat managed to rig a quilt on a broken oar as a sail and ran before the wind until about noon when they were rescued near the Helwick Lightship by the schooner Spray. They were transferred to the steam trawler Flying Scotchman and landed at Swansea.