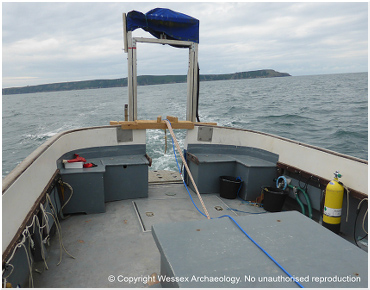 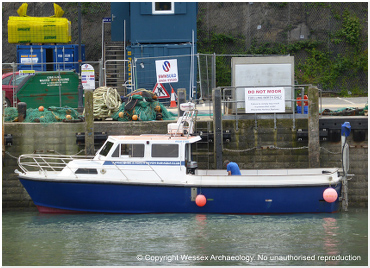 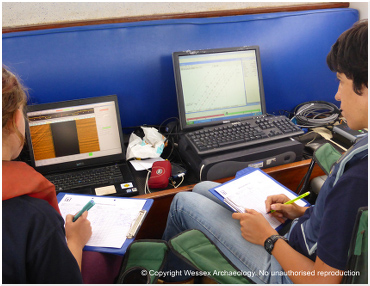 Thanks to grant funding from the Honor Frost Foundation Small Research Grants in Maritime Archaeology and Maritime Cultural Heritage awarded by the British Academy, Wessex Archaeology conducted a geophysical survey of the wreck of the vessel South Australian in July 2015. The survey was undertaken with the main objective of producing a site plan to inform further diving investigations at the site.

The wreck lies approximately three miles northeast of the island of Lundy in the Bristol Channel. A sidescan sonar survey was conducted over the site on 23rd July 2015. The data were processed and interpreted along with multibeam bathymetry data obtained from the United Kingdom Hydrographic Office. Further interpretation of features was provided by the divers familiar with the wreck site. Georeferenced images of the geophysical datasets and the positions of the interpreted features were used to produce the site plan.

Sidescan sonar data are particularly suitable for the study of marine archaeology as they are of higher horizontal resolution than multibeam bathymetry data. They do not however produce a three dimensional model of the seabed or a wreck but are more akin to an aerial photograph in nature.

The survey was undertaken using a Klein 3900 sidescan sonar towfish towed behind the vessel on a 200m cable. The long length of the cable was required, owing to the depth of water in which the wreck lies, to get the towfish deep enough. After each survey line was completed a long run in of approximately 200m was used to ensure the vessel started the next line with the cable in a straight line behind it.

The interpreted features consist of the rail stack, adjacent scour, debris field and 13 individual items of debris within the debris field. The identities of the majority of the features are not known to the divers and will provide targets for further diving investigations.

Click on the thumbnail images on the right to see a full size version of the image.

The full Wessex Archaeology report can be viewed here.